View All News
Mr Bahdur Ali spell out the expectation of poultry industry to Parshottam Rupala, Minister of Fisheries, Animal Husbandry and Dairying in his speech at 32nd AGM of Poultry Federation of India (PFI)

On the occasion of Poultry Federation of India's 32nd AGM Mr. Bahadur Ali, Managing Director- IB Group and chairman of All India Poultry Breeders Association was one of the key note speakers. Mr Bahadur Ali started his speech by thanking Narendra Modi Government for creating a separate ministry of Animal Husbandry, Fisheries and Dairying which was earlier used to come under the Ministry of Agriculture. He said that due to separate ministry for Animal Husbandry now the problem of poultry industry are addressed on priority basis. He gave an example of this by saying that due to Covid 19 our poultry industry was loosing very heavily and there was the question on the survival of poultry industry and poultry farmers but then came the relief from the government during the tenure of Giri Raj Singh ji when our industry including dairy and fisheries was sanctioned the package of Rs.15000 Crores.

He further said that still there are few more things which needed minster's attention especially for the up gradation of small poultry farmers, Vaccine import, Bird flu impact, reduction of antibiotic uses in poultry, monitoring and strict action for holding and speculation on raw material used for poultry feeding.

While welcoming the minister Mr. Parshottam Rupala ji, Mr. Ashod Thakur and other guests on the dais, he said that for last few years our poultry industry is loosing every now and then, some times due to bird flu, some times due to corona impact and most of the time due to high input cost. He said that this year poultry industry had almost collapsed due to skyrocketing prices of Soy which had gone up to Rs. 100. Smelling the grave situation we approached the ministry and convinced them about the need of import of Soy meal for the survival of poultry industry and we are thankful to minister for his proactive role in granting the permission to import the Soy and result was seen instantly when prices came down from Rs. 100 to Rs. 60 and our industry was saved from near collapse. He said that Still the stockist lobby is very strong and they know that poultry industry is growing at the rate of 10 to 12 percent whereas the production of raw material required by poultry industry is not growing more than 4 to 5 percent and there was still danger of speculation in the market to manipulate the prices and I am happy to inform all our poultry farmers that just few days back forward trading for Soy Meal is banned and for this decision we must give a standing ovation to our minister Shri Parshottam Rupala ji.

Mr. Bahadur ali also said that I have never seen such a cooperative minster in my life time who is always ready to welcome the members of poultry fraternity. He further said that today when Parshottam Rupala ji is available here on stage I would like to brief him about our poultry industry and said that:

* Integration in our poultry industry is worth Rupees 200000 crores.

* There are 12 to 15 national level players in integration whereas at the state level approximately 200 integrator are operating.

* These integrator go to farmers in villages and encourage them to start poultry farming by giving them financial and technical support and also make sure that they dont loose a single penny due to market volatility.

* Farmers are not bonded with any terms and they are free to leave the company and join any other integrator of their choice.

* Almost 85+ percent farmers are satisfied by working together with integrator where as there are 4 to 5 percent who have the problem because of miscommunication and and misunderstanding which are addressed on priority basis.

* There is not even a single police complaint by any farmers against integrator which shows the satisfaction level of both the parties.

He also took opportunity to thank the poultry farmers who stood strong with their partners during COVID 19 and saved each other. He emphasized on the need of good environment and good birds and requested the minister to addressed the problem of vaccine. He said to save the environment we have reduced the uses of antibiotic in almost 60 percent flock and if the vaccine problem is solved, soon we will stop using antibiotic in poultry.

He said that now in coming months there might be again the danger of bird flu due to arrival of migratory birds, therefor we will appreciate if decision is taken on vaccine import on priority basis. He thanked the ministry for forming a fast track committee to look in to this matter.

While concluding his speech he said that Modi ji in his speech mostly talk about every sector and our farmers will be happy and motivated if Modi ji take the name of poultry in his one of the speeches. If he does so I have no doubt that that might give  a big boost to our poultry industry. 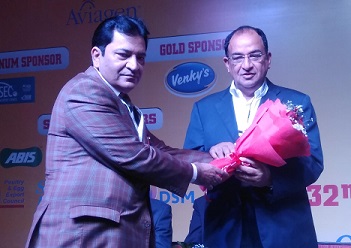