View All News
Picking a leaf from the experience of Nigeria it is right time to take a quick decision to extend the deadline of importing de-oiled soya cake (DOC).

Indian Government’s timely action to allow the poultry industry to import de-oiled soya cake (DOC) in the month of September 2021 has resulted in survival of several poultry farmers across the country who were on the verge of collapse due to high price of feed. Import of  de-oiled soya cake  had resulted in correcting its prices which had rose abnormally

It is to be noted that the import of allowed quantity has not been completed and it is absolutely necessary to extend the deadline at least till March 2022 to complete the import. Earlier last week Mr. Bahadur Ali, Secretary- All India Poultry Breeders Association and Managing Director IB Group has also said that if Centre Government does not intervene, and extend the deadline, there may be consequences.

While taking a final decision Government of India should also keep in mind that how Africa’s most populous country Nigeria is experiencing  chicken shortage as farmers have shut down their poultry farms over the high cost of feeds and other key inputs. Kingsley Imasuen, chairman of Poultry Association of Nigeria had said that there may be a price hike of poultry products ahead of the festive period consequent upon the prevailing issue of ingredients used in feed production He had also said that “Nigerian Poultry Industry is already experiencing shortages ahead of the Christmas season. As of now, there are a lot of small farmers that have shut down their business. The only people in the market are those doing large production. Most of the small farmers are folding up. The inputs, particularly maize and soya beans, are very expensive, hence the prices of birds are rising and that’s why many businesses have ceased to operate because they are not able to cope.

Picking a leaf from the experience of Nigeria it is right time for Government of India to take a quick decision to extend the deadline of importing the de-oiled soya cake (DOC) till March 2022 so that not only poultry industry can survive but the consumers can also get the egg and chicken at right price. 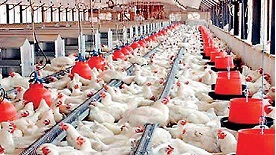