View All News
What is Double Egg Yolk, how it is formed and despite having safe to consume, why it is not sold in open market?

Surprised by the name? Don’t be, as it’s not a scam but a reality! Usually, an egg contains one egg yolk and an egg white. However, the ‘Double Egg Yolk’ is REAL and is actually formed when the chicken releases two yolks in the same shell. It is said that such eggs that have double egg yolks are produced by young chickens since their reproductive systems have not yet fully matured. Not just that, but when a chicken is nearing the end of its reproducing cycle, it can also lay eggs with a double yolk.

The good news is that double yolk eggs are safe to consume. If you ever spot an egg with twin yolks floating in it, never throw them away. However, they have a different white-yolk ratio than the egg with just one yolk! Also, a double-yolk egg means,double the protein, cholesterol and other such nutrients than a regular egg. So, make sure that you keep this in mind the next time you spot a double-yolk egg.

If you think finding a double-egg yolk is lucky, then how about an egg with more than 2 yolks? Well, people have discovered more than 2 yolks in an egg and there have been triple and quadruple-yolked eggs too. According to the Guinness World Record, in July 1971, a woman of a Poultry Farms in New York, USA reported an egg that contained nine yolks.

Mostly it is observed that double yolk eggs are not sold the simple reason for this is that the consumers are getting more health-conscious and apart from protein, a double-yolk egg ontains cholesterol as well. Thus, the farms actually pick them out package them separately and then sell them.

But as mentioned earlier the good news is that double yolk eggs are safe to consume. 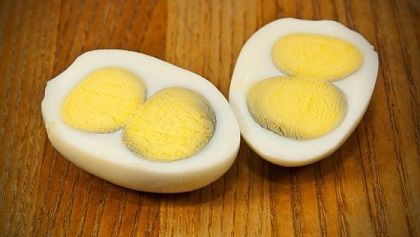