View All News
Fresh Egg in Shell are covered under the definition of agricultural produce and transportation of such eggs by rail from one place to another in India would be exempt from GST.

Karnataka bench of the GST authority for advanced ruling have put an end to an issue of whether egg is an agriculture produce or not.

According the notification issued earlier on June 28th 2017 (12/2017), agricultural produce means "any produce out of cultivation of plants or rearing of all life forms except horses". Notification also require that no further processing should be done on such  items where it doesn't alter the essential characteristics of the produce but makes it more marketable.

GST commissioner whose comments were sought by the authority for advanced ruling was of the view that the intention of the notification appears to be to given relief to farmers who, in addition to cultivation, may undertake agro based activities like animal husbandry, Seri culture etc.Where as operating a hatchery and production of egg is a commercial activity.

The authority for advanced ruling held that "Fresh Egg in Shell" on which no further processing is done, are covered under the definition of agricultural produce, thus transportation of egg by rail from one place to another in India would be exempt. 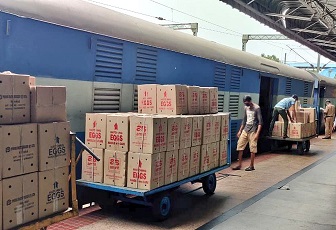